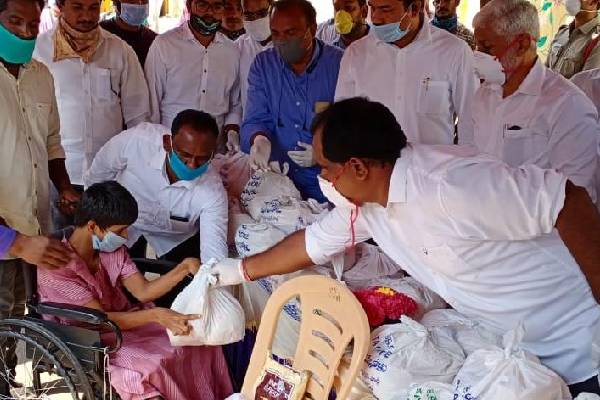 As the state corona count rose to 757, TDP president and former chief minister N Chandrababu Naidu squarely blamed the YSRCP MLAs for spreading the virus across the state with their irresponsible attitude and behavior.

Addressing the mediapersons via Zoom app, Naidu said YSRCP MLA should be held responsible for spreading the virus in Srikalahasti which was recently declared as a red zone. Naidu said after YSRC MLA Biyyapu Madhusudhan Reddy took out a rally, 13 government employees, including revenue staff, sub-inspectors, ward secretariat staff contracted the virus in the past few days. The former chief minister said the government employees contracted the virus while performing bandobust duties during the rally took out by the YSRCP MLA. “Who is responsible for this? Had the CM restrained his MLA, the Srikalahasti incident would not have led to 13 government staff contracting the virus,’’ he fired. In Chittoor, 56 cases were reported, around 36 cases in Srikalahasti.

Naidu held another YSRCP MLA responsible for the spread of virus in Guntur without naming the legislator. The senior TDP MLA charged that the YSRCP MLAs across the state were behaving in the most irresponsible manner violating the complete lockdown regulation while referring to the YSRCP Kanigiri MLA Burra Madhusudan Yadav who tried to enter the AP border from Karnataka. Recently, the YSRCP Kanigiri MLA had a scuffle with the police personnel when they tried to stop him at the Cheekalabailu check post in Chittoor district. The YSRCP MLA was travelling from Bengaluru into Andhra Pradesh without a travel pass in a vehicle along with four of his family members.

“The YSRCP party leaders are spreading the virus by making door-to-door visits to the people. Do you expect us to keep quiet while the YSRCP leaders spread the virus,”he asked. Naidu also questioned why the state government had procured one lakh rapid testing kits from the vendor Sandor Medicaids, a Hyderabad-based medical equipment supplier. The TDP leader asked why the government showed that the cost of each kit was Rs 730 plus GST while the Chhattisgarh government procured the same kits for Rs 337 plus GST. “The government is now clarifying that that the state government had included a clause in the procurement order that if the kits are supplied at a lower price than the one quoted to the state, the differential amount would be recovered from the company. Does the government believe in transparency,” Naidu questioned.

Andhra Pradesh continued to report steady cases of covid-19. On Tuesday, the state reported 35 cases taking the corona count to 757 even as the Jagan administration fights a political battle over growing controversy on the procurement of rapid testing kits from South Korea at a higher cost than other states. For the second time in a week, Kurnool continued to topple Guntur in
the highest number of corona positive cases at 184. Guntur stood a close second at 158. Rayalaseema region continued to report increasing number of covid-19 cases.

Expressing concern over the surge in the number of corona positive cases in the state, Naidu said Andhra Pradesh reported 75 cases – the single largest increase in number of cases in a day in the southern states. He predicted that coronavirus cases will grow exponentially in the state. “There could be 40,000 cases by the time complete lockdown is lifted,” a worried Naidu said. At a time when the virus was spreading fast in the state, it is unfortunate that Chief Minister Y S Jagan Mohan Reddy and his ministers were embroiled in legal battles, discussing about shifting the capital from Amaravati to Vizag, engrossed in elections to civic bodies, sacking doctors and top government officials, Naidu said.