VIJAYAWADA: Andhra Pradesh on Friday went past the mark of four lakh Covid-19 cases as over 10,000 were added afresh for the third straight day. The number of people cured of the infection increased to over three lakh with the discharge of another 8,463 patients from hospitals, according to the latest bulletin released by the State Command Control Room. The toll rose to 3,714 with 81 people dying in 24 hours ending Friday 9 am. 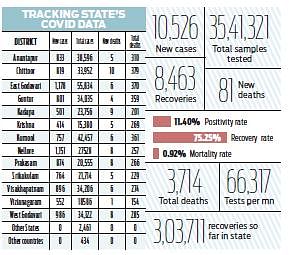 According to the bulletin, a total of 61,331 samples, including 28,153 through Rapid Antigen tests, were tested in the same time period, taking the total number of tests conducted to 35,41,321. Two districts—East Godavari and Nellore—reported more than a thousand cases in the 24 hours.

Among the 81 casualties reported in the 24 hours, Chittoor accounted for 10; Kadapa nine; Nellore, Prakasam and West Godavari eight each; East Godavari, Kurnool and Visakhapatnam six each; Anantapur, Krishna and Srikakulam five each; Guntur four; and Vizianagaram one.