Now, get home delivery of mangoes in Krishna and Guntur

VIJAYAWADA: In a major relief to mango growers, the Horticulture Department, in coordination with farmer producer organisations (FPOs), has decided to sell the fruit to people staying in gated communities in Krishna and Guntur districts, at their doorstep. 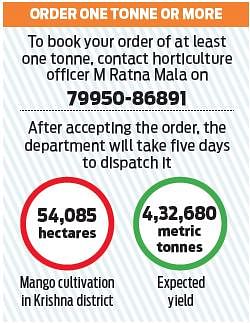 Assistant Director (Horticulture) Ch Srinivasulu told TNIE that in Krishna, mangoes were grown in 54,085 hectares in Mylavaram, Reddygudem, Agiripalli, Nuzvid, Musunuru, Vissannapeta, Chatarai, Gampalagudem, A Konduru and Tiruvuru mandals this year, and a yield of around 4.32 lakh metric tonne was expected. However, the farmers were not able to pluck them from the trees due to lack of labour during the national lockdown, he added.

As such, the department has collaborated with five FPOs to sell the produce directly to the consumers without the involvement of middlemen. “At present, the department is accepting orders from people residing in gated communities and apartments, and willing to buy at least one tonne of the fruit in bulk. After confirming an order, Chinna Rasalu and Banginapalli varieties are supplied in 5 kg packets.

The prices of a 5 kg packet of Banginipalli and Chinna Rasalu are Rs 250 and Rs 230, which includes all charges,” Srinivasulu said and added that the department took five days to procure the fruit and stock it at the ripening chamber in Nuzvid. The official informed that 50 individuals and apartment association, five of whom were from Vijayawada and two from Guntur city, had approached the department in this regard. “The first five orders will be dispatched in couple of days.”