No Covid death in 3 days; 43 new cases in Kurnool

VIJAYAWADA:  Seventy-one  Covid-19 cases were reported in the State in the last 24 hours ending 9 am on Thursday, taking the total to 1,403. Between 9 am on Wednesday and 9 am on Thursday,  6,497 samples were tested. There were no casualties in the last 24 hours and the total number of deaths remains at 31. According to the media bulletin issued by the State Command Control Room (Health), 43 out of the 71 new cases were reported in Kurnool district, taking the tally in the district to 386. 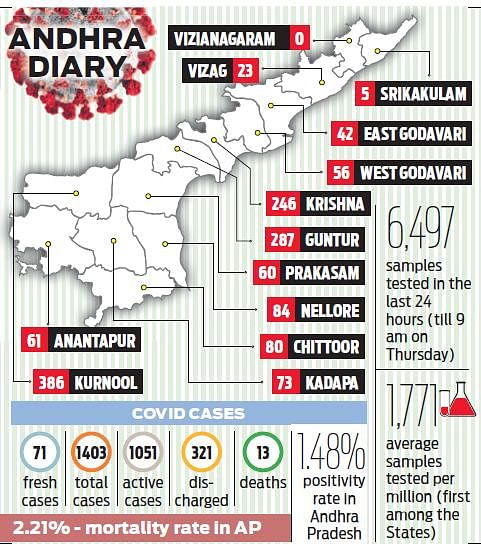 Meanwhile, the number of coronavirus cases in Krishna district went up to 246, with another 10 cases reported since Wednesday morning and the number of cases in Guntur increased to 287 with the addition of another four cases. Kadapa reported another four coronavirus cases, taking total in the district to 73. Three cases each were reported in Anantapur and Chittoor and two each in East Godavari and Nellore.

According to the media bulletin, 34 people were discharged from hospitals in the last 24 hours. In all, 321 patients have been discharged in the State so far. As many as 28 people were discharged from hospitals in Guntur, three in Anantapur, two in East Godavari and one in Visakhapatnam. The active cases in the State now stand at 1,051. The State is likely to see more number of discharged cases in the next two to three days and there were no COVID-19 casualties in AP in the past three to four days. Meanwhile, Chief Minister  YS Jagan Mohan Reddy directed officials to monitor the facilities in Kurnool Government General Hospital (GGH) and improve  infrastructure at the hospitals and quarantine centres.

80 very active clusters
According to officials, as per the newly-categorised clusters, the State now has 80 very active clusters, 64 active clusters and 66 dormant clusters besides 20 clusters with no active cases in the past 28 days.
Meanwhile, the Covid-19 preventive measures have been intensified in Kurnool, Guntur and Vijayawada. “The lockdown is being strictly implemented and high-risk patients are being monitored. A comprehensive system will be set up in three days for the effective functioning of the YSR Telemedicine,” officials said.

20 KL oxygen plant to come up at Guntur GGH

20 KL oxygen plant to come up at Guntur GGH