VIJAYAWADA:  Andhra Pradesh, yet again, recorded more number of recoveries than new cases of the coronavirus on Monday. Though the total number of infections is inching closer to the three lakh mark, the improving recovery rate has left active cases under 85,000.

While 7,866 more patients were discharged from hospitals across the state, as many as 6,780 others tested positive for Covid-19, taking the overall confirmed cases to 2,96,609, out of which 84,777 were active; 44,578 samples were tested in the 24 hours ending Monday 9 am, according to a media bulletin released by the State Command Control Centre.

District-wise, East Godavari recorded the highest number of new cases of 911, after which cumulative cases in the district rose to 41,204, the highest in the state. 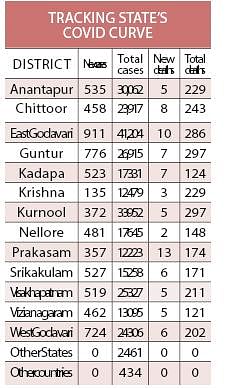 With 535 new cases, the tally in Anantapur crossed the 30,000-mark, while Visakhapatnam has reported over 25,000 infections with the addition of 519 new cases.

Krishna district, which witnessed a surge last month, has been recording less new cases since the past few days.

Meanwhile, the Covid toll rose by 82 to 2,732. Prakasam recorded 13 new casualties, followed by 10 in East Godavari, eight in Chittoor, seven each in Guntur and Kadapa, six each in Srikakulam and West Godavari, five each in Anantapur, Kurnool, Visakhapatnam and Vizianagaram, three in Krishna district and two in Nellore district.

Kurnool and Guntur districts both have reported 297 casualties each.