VIJAYAWADA:  Covid-19 positive cases in Andhra Pradesh shot up to 192 by 9 pm on Saturday, with a total of 28 new cases reported since 10:30 pm on Friday.

As per the medical bulletin issued by the State government on Saturday, the number of cases increased to 180 by 10 am on Saturday and by 9 pm, it went up by another 12 cases.

One more death reported in Anantapur district. One more person, who tested positive, recovered and was discharged from the hospital on Saturday, taking the total number recovered cases to five in the State. Already, one each in Visakhapatnam, Kakinada, Ongole and Nellore have recovered from coronavirus.

The 24-year-old youth from Vijayawada One Town area was admitted to Government General Hospital on March 20 with Covid-19 symptoms. He returned from Paris (France) via Delhi. After 14-days of isolation battling the virus, he recovered. After he tested positive, doctors tested his samples twice and on both occasions, the results came negative.

Meanwhile, State official machinery is engaged in tracking the people who attended a religious meeting Delhi in Mid-March and returned to various places in the State.

The majority of the 190 confirmed cases of the virus in the State are the people who returned from Delhi after attending the religious conference there. State Nodal Officer for COVID-19 released the towns and districts of those who attended Delhi meeting and tested positive for the virus. Details of a total of 89 patients were released and the rest would be released soon. 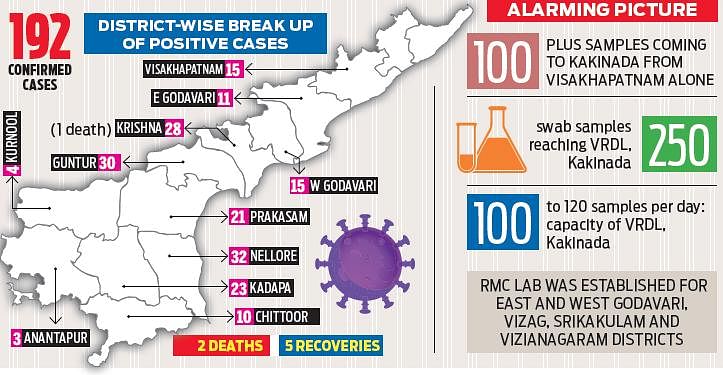 The medical bulletin said that all those who came in contact with the people tested positive for coronavirus were either kept in isolation or shifted to quarantine centers. Samples of all of them had been collected and sent for testing. Meanwhile, samples of another 116 people, both symptomatic and asymptomatic from across the State, were collected on Saturday and sent for testing. The number could be more as officials of Krishna and Anantapur district refused to disclose the details of the samples collected from the people on Saturday.

In Visakhapatnam, since Friday night, as many as 27 people were shifted to the isolation ward at Chest Hospital and their samples were sent for testing. In Srikakulam district, nine new suspected Covid-19 cases from Kaviti, Meliaputti, Kanchili, Srikakulam mandals were admitted to GGH at the district headquarters. Three COVID-19 suspected cases in Vizianagaram district were admitted to the isolation ward at GGH on Saturday. Samples were taken and sent for testing.

In Tirupati of Chittoor district, three family members of a person, who had tested positive, were shifted to the isolation ward.  In Kadapa, samples of 20 people, who were in contact with people who tested positive, sent for testing. They were sent to home quarantine.  In Kurnool and Nellore districts, no new suspected cases of the virus were reported. However, results of over 70 samples in Nellore and around 250 in Kurnool are awaited.