Fourth coronavirus death in Andhra Pradesh, random tests to be held in hotspots

VIJAYAWADA: COVID-19 toll increased to four in the State with a 45-year-old man from Nandyal in Kurnool district succumbing to the virus.

He was admitted on April 1 and died on April 3.The number of cases by Tuesday evening increased to 314 with nine more positive cases reported from Guntur district and one each from Kadapa and nellore district. With the latest addition, the number of confirmed cases of the virus in Guntur shot up to 41, that of Kadapa to 28 and Nellore to 43.

Meanwhile, Chief Minister YS Jagan Mohan Reddy directed the officials concerned to conduct random survey (testing) in hotspots, like the one recently conducted in Visakhapatnam.Taking stock of the coronavirus situation in the State at a high-level meeting on Tuesday morning, the Chief Minister asked the officials to be prepared to face any situation. Officials informed him that from 6 pm on Monday till 9 am on Tuesday, a total 150 samples were tested and only one tested positive. They explained that testing of all those people, who returned from Delhi after attending a religious meeting there and their primary contacts, has almost been completed and expressed hope that the number of cases will come down in the coming days.

The CM took stock of the situation at the quarantine centres and relief camps. As many as 5,300 people are there at different quarantine centres run by the government. As many as 19,247 people, who returned from foreign countries, are still in home isolation. They are being monitored through a special mobile app.

Jagan also reviewed the situation at hospitals dedicated for critical care and district-level COVID-19 hospitals. He stressed that the Standard Operating Procedure (SOP) has to be implemented in letter and spirit. All facilities should be in place in the hospitals as per SOP by next Monday, he said.

Paddy, maize procurement begins
Officials explained to the CM that procurement of paddy, maize has commenced and all measures were in place to ensure that farmers were not subjected to any inconvenience. On an average, 150 trucks of bananas are being exported and at the same time the marketing department is purchasing them and supplying the same to local markets. As the exports of tomatoes are reduced gradually, it is now available in local markets at low cost.  Officials said they have set up an onion market outside Kurnool to ensure that farmers do not suffer.  Meanwhile, exports of aqua products are picking up and on an average, 40 containers a day are being exported. Most of the processing and cold storage plants are functioning. Enquiring about unseasonal rains in isolated places in the State, the Chief Minister asked the officials to initiate steps to safeguard the interests of farmers. 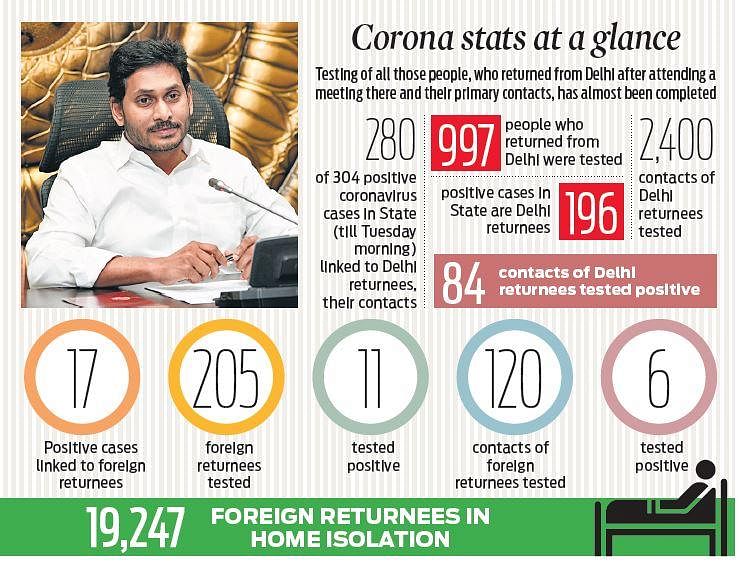