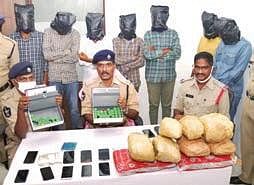 “All of them are graduates, and one of them studied engineering. They became addicted to drugs and became drug peddlers to support their habits,” he said, adding that apart from the ganja, the police seized nine cell phones and one electronic scale from them.

The ganja was brought by one Korra Podilam alias Satish of Vangasara village in Chintapalli mandal, Visakhapatnam district to Guntur while charas was brought by Dontha Praveen Kumar and others from one Jagan in Visakhapatnam to Guntur. The accused were caught while trying to sell the drugs to college students. To make it easy to transport and sell, the ganja was converted into a paste (charas) and brought in 10-gram bottles placed in dictionary- shaped containers to avoid suspicion.

Each bottle was sold for Rs 3,000, and cigarettes coated with charas were being sold for Rs 200 each. “We registered cases under Sections 269 and 188 of the IPC and Section 8(c) r/w 20(b) (ii)(A)(B) of the NDPS Act, and they are being produced in court,” the SP said. He further advised youngsters not to get addicted to drugs and spoil their health and future, and requested the public to alert the police by dialling 100 or 1,090 in case of any violations. He also appreciated the police team that nabbed the accused, and gave them rewards.

India Spices: Most end up; mentha oil down on weak bulk demand –

India Spices: Most end up; mentha oil down on weak bulk demand –