VIJAYAWADA: The COVID-19 tally in Andhra Pradesh raced past the two lakh mark as another 10,171 cases were reported in the 24 hours ending Friday 9 am. The fresh cases emerged from the 62,938 tests conducted.

So far, the state has conducted 23,62,270 tests, putting it among the top five states with respect to the number of tests conducted after Tamil Nadu, Uttar Pradesh and Maharashtra. Also, tests conducted per million population stood at 44,237, highest when compared to any other state. 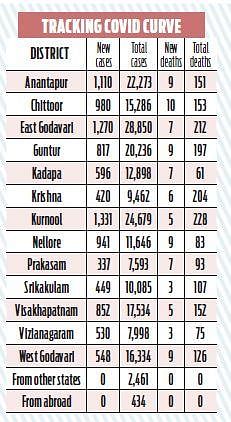 According to a media bulletin issued by the State Command Control Room on Friday evening, 62,938 more samples were tested, including 33,784 Rapid Antigen tests.

Four districts — East Godavari, Kurnool, Anantapur and Guntur — have recorded more than 20,000 cases each. As many as 28,850 have tested positive in East Godavari, followed by 24,679 in Kurnool, 22,273 in Anantapur and 20,236 in Guntur. Among the 89 casualties reported in the 24 hours ending Thursday 9 am, Chittoor district accounted for 10 casualties.

Ten more inmates of Rajamahendravaram Central Jail tested positive for COVID-19, taking the total number of positive cases in the state’s biggest prison to 257. Meanwhile, a 50-year prisoner, who fell in the toilet and succumbed to injuries tested positive, after his death. At least 30 prison guards are under home isolation, central jail superintendent Srirama Raja Rao said

As many as six staff of the famous Satyanarayana Swamy Temple at Annavaram in East Godavari district tested positive for the coronavirus. Temple Executive Officer Trinadh Rao said tests were performed on the staff and priests after one of them was infected.In the subsequent tests, seven more tested positive. The affected staff and priests were sent to home isolation, the temple official said