VIJAYAWADA: COVID-19 positive cases in the State touched 955 with the addition of 62 cases in the past 24 hours ending 9 am on Friday. Two deaths — one in Anantapur and another in Kurnool — were reported, taking the virus toll to 29. In Kurnool, 27 more cases were reported in the last 24 hours, taking the count to 261. The number of cases in Guntur crossed 200-mark with 11 new cases. Krishna (14),  Anantapur (4), Prakasam (3), East Godavari (2) and Nellore (1) accounted for the remaining cases.

According to the media bulletin issued by the State Command Control Room, 6,306 samples were tested between Thursday 9 am to Friday 9 am. In Anantapur district, four patients were discharged from the hospital upon recovery from the disease. In all, 145 patients had been discharged across the State till date.
Meanwhile, Chief Minister YS Jagan Mohan Reddy instructed the officials to closely monitor the ground situation in red zones, strengthen the telemedicine system and ensure medical facilities to high-risk patients with other ailments. He also directed them to make essential commodities available across the State.

At a review meeting with senior officials and district collectors and superintendents of police on Friday, Jagan directed the officials to monitor the situation from ground zero level and ensure availability of essential commodities near the containment zones. “Only one pass should be given for a family and only that person should be allowed to come outside,’’ he told the officials. He ordered the officials to intensify the preventive measures at Nandyal in Kurnool district in view of more number of cases from the area.

Briefing the measures being taken to contain the spread of COVID-19 in Kurnool and Guntur, Health Minister Alla Kali Krishna Srinivas (Nani) said the pandemic has not affected all parts of the two districts. Regarding the success of the YSR Telemedicine programme, the Chief Minister asked the officials to strengthen the programme further. For the same, officials told the Chief Minister that so far 8,395 people have consulted doctors through this programme and medicines were also being delivered to the patients. He directed the officials to ensure hassle-free medical services to dialysis patients and other high-risk patients. 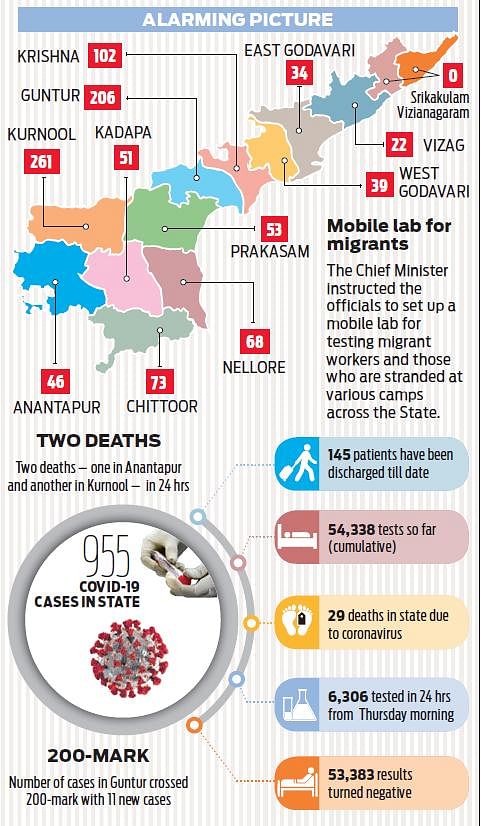