VIJAYAWADA: Andhra Pradesh has tested over 25 lakh samples with the addition of 46,999, including 24,331 Rapid Antigen tests, in the 24 hours ending Monday 9 am. By testing a total of 25,34,304 samples, it is among the top five states that have conducted the most tests.

According to a media bulletin issued by the State Command Control Room, the number of recoveries continued to be better than the active cases.

With 7,665 patients getting discharged from Covid hospitals between Sunday and Monday, the overall recoveries rose to 1,45,636, leaving 87,773 active cases.

East Godavari, which was the only district that reported more than 1,000 cases in the said time period, has also recorded most overall infections (32,938).

While Kurnool and West Godavari registered 883 and 722 new cases, Krishna district saw the least number of fresh infections of 146.

Among the 80 casualties reported in the 24 hours ending Monday 9 am, Prakasam accounted for eleven deaths, Guntur 10, West Godavari and Srikakulam seven each, Chittoor and Kurnool six each, Ananatapur, Nellore, Visakhapatnam and Vizianagaram five each, and East Godavari four. 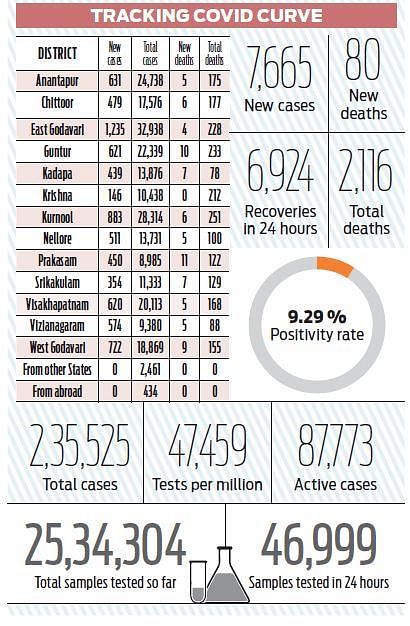