Coronavirus claims life of another doctor in Andhra Pradesh

VIJAYAWADA: Taking the total number of COVID-19 deaths in the State to 10, a well-known private doctor from Kurnool city died on Tuesday. The 78-year-old was running a private nursing home in the Old City of Kurnool.

After the spike in the positive cases in the city after some attendees of Nizamuddin Markaz tested positive for the virus, authorities have declared the area a red zone. It is suspected that the doctor might have contracted the infection from the Delhi returnees, who came for treatment.  The doctor was admitted to the Kurnool GGH with acute respiratory problems on Monday evening. He died in the early hours of Tuesday and he tested positive for the virus in the evening. 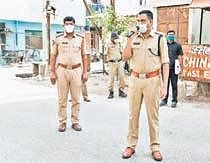 The victim’s son is also a doctor working in the Kurnool Government General Hospital. Soon after the elderly person was admitted to the hospital, officials sent the samples of his son for testing and they came negative. Health Department Officials also announced deaths of two more persons, one, a Nellore doctor, who succumbed to the virus in a Chennai hospital while undergoing treatment, after being transferred from Nellore GGH, and another patient from Vijayawada, who was also suffering from diabetes and asthma. He died on April 12 morning. He was a primary contact of a confirmed case.

Meanwhile, the number of positive cases in the State increased to 483 with 44 more people testing positive from 5 pm on Monday to 5 pm on Tuesday. COVID-19 tally in Guntur district crossed 100-mark and stood at 114 with the addition of 21 new cases on Tuesday.  Kurnool district with 91 cases stood second and Nellore with 57 cases stood third. Both Srikakulam and Vizianagaram districts have not registered a single positive case so far.

With a railway employee from Rajasthan working in Kurnool district, who tested positive and recovered, getting discharged from the hospital on Tuesday, the total number of people recovered so far in the State stands at 17.

The State government on Tuesday alerted people of certain locations in Prakasam, Guntur, Kurnool, Kadapa, Chittoor, Nellore, West Godavari, Krishna, and Anantapur districts after new positive cases reported from those places. People in those areas were asked to strictly adhere to the lockdown guidelines and cooperate with the authorities.

On the other hand, as many as 900 samples of people with COVID-19 symptoms, primary and secondary contacts of the confirmed cases, were sent for testing on Tuesday. In Guntur, 466 samples were collected on a single day, followed by 185 in the Kadapa district.