GUNTUR/KADAPA/ANANTAPUR/KURNOOL/NELLORE/KAKINADA: After fresh directions from Chief Minister YS Jagan Mohan Reddy, district administrations have shifted their focus on assisting migrant workers by providing them counselling, food, free transportation to nearby relief centres, and, later, sending them to their respective states either in buses or Shramik Special trains. In Guntur district, revenue officials have sent 267 migrant workers to Odisha in nine APSRTC buses; two more buses were arranged for 67 Bihar migrants to take them to Vijayawada where they will board a Shramik Special; 147 Jharkhand natives were also sent home in a train.

Another group of 400 people were sent to their native Uttar Pradesh in a train from Namburu.
According to district officials, 660 migrants, who walked till Andhra Pradesh, were shifted to relief centres where they are being provided free food and water. As many as 31 Srikakulam natives were also sent back home in RTC buses. Similar measures are taken in Kakinada of East Godavari district, where stalls are arranged every 20 kms to give food packets to the migrants. 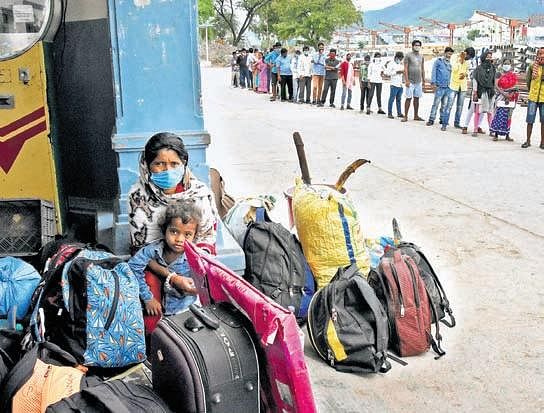 A total of 14 buses, including five private ones, have been arranged. From Nellore, 25 migrant workers were shifted to Srikakulam in RTC buses. They had walked from Chennai to the border district, and were shifted to a relief camp. On Sunday too, 84 Bihar migrants who worked in cement companies in Gadivemula were sent in special buses to Nellore railway station, where they boarded a Shramik train. As many as 148 natives of Maharashtra and Bihar who were stranded in Kadapa and Mydukur, were taken to their home states in another train; 76 from Nanded who were stranded in Mydukur were also sent home after CI Madhusudhan Goud gave permission for them to use their 10 autorickshaws for the travel. These people move from one place to another seeking alms.

They were given essential commodities, vegetables and `30,000, collected in the form of donations, to meet their fuel expenses. Meanwhile, arrangements are being made to transport the migrants stranded in Anantapur district, many of whom were shifted to relief centres after they were found walking to their native places on Monday night. They will board special trains bound for Uttar Pradesh and Bihar.

Taking stock of the situation, Anantapur collector Gandham Chandrudu said each train has the capacity to carry 1,452 passengers. He advised the officials to ensure that the migrants from one place be seated together. He directed DRDA PD Narasimha Reddy, MEMPA PD Vijayalakshmi and other officials to arrange food for the migrants. Meanwhile, Prakasam collector arranged a bus to Kotha Mallapuram in Besthivaripeta mandal for a group who had reached Gorantla from Tumkur, Karnataka on foot.

DGP flags off N-E bound special train
Vijayawada: DGP D Gautam Sawang flagged off a Shramik Special train from Rayanapadu railway station on Sunday. The train is carrying 1760 migrant workers, who were stranded in AP after the enforcement of lockdown, to the north-eastern states. Sawang earlier interacted with the migrant workers and inquired about the amenities provided to them by the officials. He said, as many as 1,760 citizens from the northeast were stranded in various districts of AP. Indian Railways had begun operating Shramik Specials on May 1.