VIJAYAWADA:  An 85-year-old woman and four others, who recovered from COVID-19, were discharged from KIMS Savera, the designated COVID-19 hospital in Anantapur district, at 7:30 pm Tuesday. Another person was discharged from a hospital in Visakahapatnam. With this, the number of Covid-19 recoveries touched 102 in the State.

The woman is the oldest to have beaten coronavirus in the State. She is from the Housing Board Colony in Hindupur.  She had contracted the virus from her 60-year-old son, who succumbed to COVID-19 on April 4, the first corona casualty in the district. Following his death, samples of his primary contacts, including his family members, were tested on April 5 and the 85-year-old tested positive.

She was admitted to the hospital in a critical condition and given her age,  many doubted her chances, but doctors worked hard to save her and their efforts yielded results.  Subsequent samples taken from her tested negative and on Tuesday, she was discharged and shifted to her house in an ambulance. District Collector Gandham Chandrudu expressed happiness and congratulated the doctors and the medical and health department. 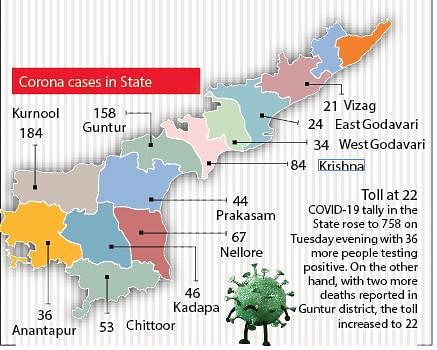 At the time media bulletin was released by the State health department on Tuesday morning, the number of recoveries stood at 96 with four people (Kurnool – 3 and Nellore – 1) discharged since Monday morning.Meanwhile, COVID-19 tally in the State rose to 758 on Tuesday evening with 36 more people testing positive. On the other hand, with two more deaths reported in Guntur district, the toll increased to 22. According to official sources, the two men (age was not disclosed) were from Old Guntur. With their death, the coronavirus toll in Guntur district increased to six. Now, Guntur along with Kurnool district occupies the first place in the number of COVID deaths in the State.

Both the districts have reported six deaths each followed by Krishna district with five deaths. According to the media bulletin issued by the State government, of the 36 new cases reported till Tuesday morning, Kurnool district alone accounts for 10, taking the total number of cases in the district to 184. Guntur, which registered nine new cases, stands second with 158 cases. As many as six new cases were reported in Kadapa district, four each in West Godavari and Krishna districts and three in Anantapur district. From 9 am on Monday to 9 am on Tuesday, a total of 5,022 samples were tested and among them, only 35 tested positive. In the number of tests per million, the State stands second, next only to Rajasthan and much ahead of the rest.